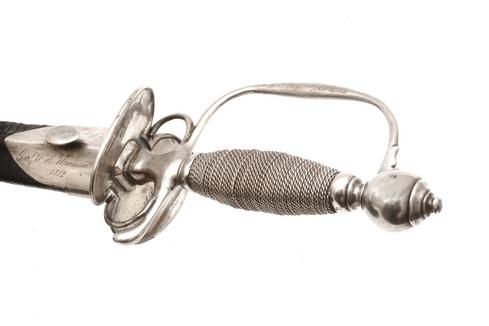 Call or Email to Order

The Mars & Neptune Trust's Inaugural Sale was marred by the seizure of the Symmes-Harrison sword by the Town of Windsor police without injunction, warrant or any evidence shortly before it was to be auctioned and which was fully expected to sell between $50,000-$100,000, based on left bids, fully-booked phone lines and strong pre-sale interest.  This sword had been purchased by Trust founder and President, James Kochan in New York on January 22, 2015 at Christies’ highly public sale of the noted silver collection of Eric Martin Wunsch.  Kochan consigned it to the Trust’s auction, with all proceeds to have benefited the Trust.  According to Christies’, Wunsch had purchased this sword from one of New York’s oldest and most respected dealers in the early 1970s and it had been in his collection since that time.

Shortly after Nadeau’s opened for the 9 a.m. preview of the Trust sale on October 19th, it received a phone call from a man identifying himself as Tom Ratterman of the Symmes-Harrison Memorial Foundation of Cleves, Ohio, claiming that the sword had been stolen from their museum in 1993.  After some discussion, the man stated that the sword was not in fact their property, but that of the Probate Court of Hamilton County, Ohio.  The date of supposed theft post-dated Mr. Wunsch’s acquisition by nearly two decades, which Mr. Ratterman did not explain and which raised some suspicion of a hoax.  Ratterman was assured that if he could produce even one piece of evidence to suggest that this sword was stolen— a police report, a newspaper article, a letter, anything—within the next two hours prior to the auction, the sword would be pulled from the sale pending further investigation.  He claimed he could not do so, “because it was a weekend” and so it was decided that without evidence, the sword would be auctioned as scheduled, but it would not be released to a winning bidder for at least “two working days” following the sale, allowing Ratterman or any other party to come forth with evidence or information on Monday or Tuesday of the following week.  If in the light of evidence it appeared that this sword had indeed stolen, the sale would be rescinded and the sword returned to the rightful owner.  After agreeing to this proposal, Mr. Ratterman said that “If it was determined that the sword wasn’t stolen, the Symmes-Harrison Memorial Foundation wished to leave a left bid of $15,000 on the sword”, which he proceeded to place with the Nadeau staff.

Not long after the auction began at 11 a.m., Kochan was called from the auction floor into the Nadeau office, where two Windsor police officers acting upon the telephone request of a police sergeant from the Village of Cleves, Ohio, demanded the return “of the stolen sword”.  Kochan informed them there was no stolen sword in the sale and that he could produce proof of legal ownership and provenance of the Harrison-Symmes sword that predated the supposed theft in 1993, which, at that point, was undocumented hearsay made by a private party in Ohio and relayed to the Cleves police.  Kochan asked the officers for warrant, injunction or any written evidence or legal writ and they admitted that they had none, but “were not leaving without the sword.”  Under intimidation, Kochan reluctantly released the sword to them. He boxed and sealed the sword under the officers’ eyes, was given a signed seizure receipt and enjoined the officers not to open said box or release the sword to any party whatsoever unless to the Trust or its designated agent, until the matter could be legally resolved in local or Connecticut jurisdiction.  For two days following the sale, Windsor Police Sergeant Valenti, who had seized the sword, failed to return any of the Trust’s communications regarding the status of the sword, paperwork or documentation of the alleged theft.   The Trust also communicated with a respected Connecticut lawyer, who told them that the police had no right to seize the sword without an injunction or evidence and that the entire affair was highly irregular.  He also advised Kochan to file for the return of the sword, which could be done by checking two blocks on the seizure receipt, one filing for return of his legal property and the other, calling for a hearing in Connecticut courts should the item not be returned.  Both were checked off, the document signed, scanned, copied and emailed to the Windsor police, noting that the original was being posted by certified mail and again, enjoining them not to release the sword to any party from Ohio in the interim.  Sergeant Valenti finally responded to Kochan on the morning of October 23rd and said that they had just received an injunction from the Probate Court of Hamilton County dated October 22nd (three days after the seizure) and that the sword was going to be collected by a deputy from Hamilton County and transported to Ohio.  Valenti refused to provide Kochan with a copy of the injunction and attached documents and said that Windsor was not involved and that he should take up the issue with a Sergeant Lang at the Village of Cleves police department.  Sergeant Lang also refused to release a copy of the injunction and then referred Kochan to the Clerk of Court, Hamilton County, who upon request stated that “it was public record” and should have been released at Kochan’s first request.

Upon review of the injunction, it was found that the sword purported to be stolen had been missing since circa 1979 when it had been on long-term loan by the Probate Court to the Cincinnati Historical Society and NOT stolen in 1993 from the Symmes-Harrision Memorial Foundation, as alleged by Mr. Ratterman in his phone call on the morning of the 19th and late night email to Nadeau’s on the 18th, which was found shortly after his call.  The injunction described a sword with a 36-46 inch-long blade, with a “blood groove” or fuller and bearing six names inscribed upon it. The seized sword has a 34.5 inch-long, triangular blade with no blood groove and different inscriptions than those in the injunction, being five on the sword hilt and two on the scabbard throat.  The accompanying attachments were all documents from the 1990s that related to the Symmes sword missing from the Cincinnati Historical Society, which had been “presented” to the Probate Court of Hamilton County in 1921 by lawyer William W. Symmes, the great grand-nephew of John Cleves Symmes in 1921, along with some Symmes documents and a painting described as the “original portrait by Charles Willson Peale of Judge John Cleves Symmes.”   Kochan, a graduate of Miami University, knew that the original Peale portrait of Symmes hangs in the university’s art museum on its Oxford, Ohio campus and had been purchased for the university from a direct Symmes descendant in 1950.  William W. Symmes, a collateral descendant, was never in line to inherit the original Symmes-Harrison sword or portrait (both of which were supposed to pass from eldest son to eldest son in direct line of succession) and it appeared that he had acquired or inherited copies of both the sword and portrait rather than the originals and these copies were the pieces he presented to the Probate Court in 1921.  It is not clear from any documents produced by the Probate Court or any other party whether William W. Symmes actually donated or transferred ownership of the copy portrait and sword to the Probate Court or whether they were merely long-term loans to the Court, as was quite commonly practiced with museums during that period.  Kochan noted that the court injunction provided no proof of legal ownership for the sword and though he requested such documentation, none has yet been forthcoming.

Following the seizure of the sword and receipt of the injunction, the Trust has been researching the history of the Symmes-Harrison sword from John Cleves Symmes to present and has unearthed a great deal of new information, much of which suggests that there are indeed two swords, similar in form, but the original (seized two weeks ago from the Trust sale) differing in some respects from the copy sword missing or purportedly stolen from the Cincinnati Historical Society, just as there are two Symmes portraits:  the original by Peale now at Miami University and a copy presented as the Peale original to the Probate Court in 1921.

On Friday afternoon, November 1st, Kochan received a telephone call from a detective from the Hamilton County Sheriff’s Office, who had been assigned the case the previous day. Both parties agreed that their mutual goal is to ascertain correct provenance of the seized sword in question and both also agreed to share all documents and leads relating to the sword, its possible loss or theft in the past, and legal ownership to present.  The detective is planning to travel to the Trust’s offices in Wiscasset, Maine in two weeks to consult with Kochan and review all documentation.  Stay posted for further updates.

The Mars & Neptune Trust held its Inaugural Sale of important martial and naval arms, militaria, manuscripts and related early Americana on Saturday, October 19th at 11 a.m., hosted by Nadeau’s Auction Gallery in Windsor, Connecticut.  The cataloged sale of 182 lots, which included deaccessions from three museums, resulted in more than $500,000 in hammer prices (not including buyer premiums) for the 151 lots sold.  Leading the sale was the portrait of a colonial American artillery officer painted by William Williams in 1772, which hammered at $55,000, a new record for this important, but obscure English artist working in Philadelphia (1747-1769) and New York (1769-c. 1776) who is credited with being the first painting instructor of Benjamin West.  Other notable sales included an illustrated, 1778 manuscript copy of William Congreve’s Exercise and Manouvres for two Light 6 Pounders at $17,000 hammer, Mather Brown’s magnificent oil of Smugglers Pushing Off Their Boat at $25,000 hammer and a French Model 1717 Rampart Musket for $22,500.  We are happy to note that the majority of pieces sold were acquired by American and Canadian museums.  All net proceeds from the auction are dedicated to support Trust programs and those of their partner museums.

"In history, a great volume is unrolled for our instruction, drawing the materials of future wisdom from the past errors and infirmities of mankind."